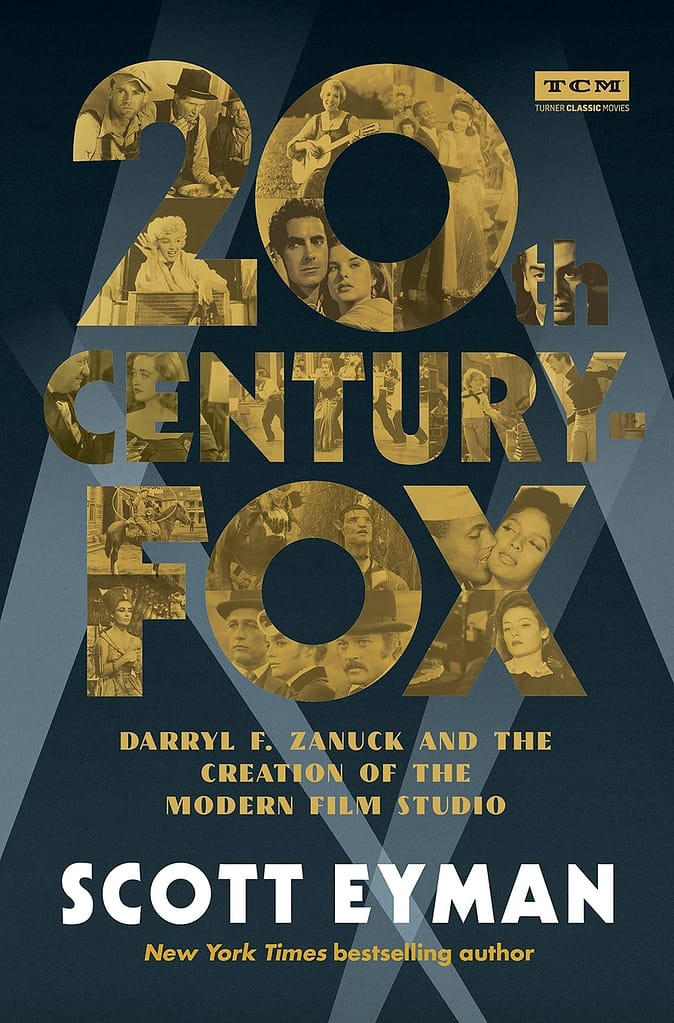 There may be no other sound more synonymous with the moviegoing experience than 20th Century Fox’s opening fanfare. When the Fox Film Corporation held a small stable of B-tier stars in the 1920s, it would be hard to predict that generation of moviegoers would equate their logo with a night at the movies. Scott Eyman’s biography 20th Century Fox examines how the studio and Hollywood itself managed to rewrite history and become a global phenomenon, surviving everything from the Great Depression to television.

Scott Eyman undertakes the full history of the studio from its creation by former nickelodeon theater owner William Fox to its acquisition by Disney in 2019. This history works not only as an in-depth look at one of the Big Five Hollywood studios but wonderfully captures the evolution of Hollywood over its first century. Actors, stars, directors, and even executives come and go but the studio’s Hollywood dream factory still remains as it evolves and adapts from era to era.

The two main men most responsible for 20th Century Fox’s legacy and success are extraordinary characters and provide the nucleus of the book’s narrative. William Fox, a Hungarian immigrant, worked his way up from owning one Nickelodeon to the Fox Film Corporation that by the late 1920s was worth almost $300 million. A cold calculating businessman, Fox largely strove to make mid-budget programmers, banking on the star power of contract players like Theda Bara, William Farnum, and Tom Mix to sell short hour-long features that ran on modest budgets. His reign came to an abrupt halt in 1930 after his investment in theaters put the company and he reluctantly sold his stock in the company.

William Fox (left) built the studio in the early days of feature films before losing it in the Great Depression. Darryl Zanuck (right) solidified the studio’s status as a major Hollywood production company after merging it with his 20th Century Productions in the mid-1930s.

Zanuck, coming in several years after Fox’s financial ruin, was almost the exact opposite of his predecessor. Considering himself a showman just as much as a businessman, Zanuck was active in the filmmaking process, frequently working with screenwriters to get his films’ stories just right. Working at Warner Brothers on such classics as Little Caesar, 42nd Street, and I’m a Fugitive on the Chain Gang, Zanuck had already proven himself to be a talented production chief who could leave his distinct mark on the films he helped produce. After Zanuck’s independent production company 20th Century Studios merged with Fox in 1935, Zanuck would serve as the main creative voice at the studio for the next several decades.

Zanuck’s charisma, love of movies, and business acumen set him apart from many of his contemporary studio heads who felt more at home in a board meeting with investors in New York than at a script reading in Hollywood. On the other hand, Zanuck’s inflated ego, self-destructive nature, and womanizing made many of the studios’ employees’ work life rather difficult. Eyman expertly uses Zanuck as an examination and embodiment of the most magical elements of the Hollywood dream factory while simultaneously typifying its abusive underbelly that has gained more coverage in the recent past.

Aside from the life stories of Fox’s founder and most important creative, the book also briefly covers the careers of stars like Theda Bara, John Ford, Tom Mix, and Tyrone Power who had long relationships with the Fox Film Corporation and 20th Century Fox.  Although each star is only given several pages, these snapshots of their careers provide a speed-up version of Hollywood history, showing us how business decisions and studio politics influenced their films and onscreen personas. Another nice touch in the book is that each chapter title is a Fox film that corresponds with the narrative given in each section such as What Price Glory? and No Way Out.

For covering a century of history, this book is a compact, fun read even when behind-the-scene business decisions and box office numbers are discussed. Eyman is at his best weaving in fun anecdotes and astute commentary on the behind-the-scenes of many of 20th Century Fox’s films and stars. Differently worth a read to revisit and discover tons of Hollywood history and great films produced by one of the best studios that ever churned out pictures.

One Reply to “20th Century-Fox: Darryl F. Zanuck and the Creation of the Modern Film Studio — Book Review”