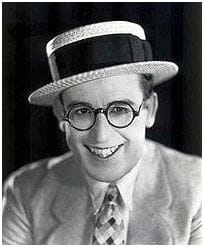 Harold Lloyd has always been one of my favorite filmmakers. I fondly remember watching Safety Last on my dinky laptop in my college apartment trying my best to keep my laughter at a minimum to not disturb my studying roommate. I knew from that moment that I had to watch everything Harold Lloyd was in.

I didn’t want to burn through his silent films in one sitting so I reserved his films to when I was feeling down or knocked out sick for a couple of days. I knew that no matter what mood I was in that I would be cheered up by one of his films. Maybe it was that out of all the silent comedians he was the most like me: a young, optimistic, middle-class, white, nerdy kid with glasses just wanting to find a girl and succeed in a crazy world.

To celebrate his illustrious silent career 127 years after his birth, I’ve ranked all of Harold Lloyd silent feature-length films in order from my favorite to my most favorite!

He didn’t set out to make anything longer than two reels but after finding his hands full with a lot of good gags and material, this film turned out to be his first feature film. Harold, a spoiled rich socialite, joins the navy to prove to the father of the girl he wants to marry that he is a man worry of his daughter. Harold gets his chance to prove his worth when his girl, played by Lloyd’s eventually offscreen wife Mildred Davis, is kidnapped by the locals on her vacation in the fictional tropical country of Khairpura-Bhandanna by setting out to rescue her. The film does get muddled up a bit with the film’s exoticism of indigenous culture and Mildred’s passive, damsel-in-distress role in the film but Harold builds off his stunts and gags he excelled at in his shorts. Overall, A Sailor-Made Man shows a young Harold was well capable of making a full-length feature packed with fast-paced, inventive gags.

Unlike most of his films, Harold is already married for this adventure. He has to deal with his rowdy in-laws visiting and tries to get them to scram so he can spend more time with his wife instead of with his overbearing mother-in-law. The film is little concerned with any plot but is driven by its well-constructed gags. First Harold must control a turkey on a crowded bus, then survive his mother-in law’s backseat driving, and finally, overcome the guilt of accidentally “killing” his teetotaler mother-in-law while stupidly drunk. While the film lacks narrative tension and suspense that Harold Lloyd was so talented at crafting, the film is a fun hour of non-stop laughs.

Harold stars as a country doctor who believes that laughter is the best medicine. He falls in love with his patient, played by Mildred Davis, and must save her from the family doctor who has been prescribing her unnecessary medications to carve himself a fat paycheck out of the family’s fortune. The film showcases Lloyd’s ability to capture the quaint early 20th countryside as no one else can. The best gags come at the film’s climax when Harold pretends to be a recently escaped dangerous lunatic Lumpy Logan to rid the family of their selfish doctor.

In the first of what Harold himself would later call his ‘character pictures’, Harold is a timid young man bent on becoming a real man to stand up to his life-long bully and win the girl. Mildred Davis gets a lot of quality screentime and charms as Harold’s boy crush, even though she looks WAY too old to be sporting a bow. Many of the gags in the film help to build characters and relationships, such as when Harold mistakenly eats a mothball instead of a piece of chocolate but must pretend to enjoy it to not offend his girl. Lloyd’s second feature film shows his ability to craft lovable characters that we as the audience root for and empathize with as they strive to overcome their own challenges.

Harold ended the silent era just as he started, a young bachelor looking to prove his worth and find a girl to settle down with. In this film, Harold is a baseball fanatic who can’t keep down a job because of his baseball obsession. After getting fired yet again from his new job as a taxi driver, Harold must help to save his future father-in-law’s old-fashioned trolley car from being taken over by a train rail monopoly. Watching Harold Lloyd frantically driving the trolly car in 1920s New York City (shot on location) is an adrenaline rush unlike any other in silent comedy. A brief cameo of Babe Ruth and a glimpse of Yankee Stadium in the 1920s is a real treat as well.

Harold plays a selfish millionaire who ends up falling in love with a Downtown girl who helps run her brother’s charity mission, played by Jobyna Ralston. The romance between Harold and Jobyna is pristine as Harold learns to share his riches with those who need it instead of buying a new $10,000 car each week. The film is most famous for Harold getting stuck with shepherding a few of his drunk friends to his own wedding and rightfully so!

In her first film paired with Harold Lloyd, Jobyna Ralston plays a nurse who comes with Harold’s hypochondriac wealthy businessman on his trip to a tropical island. Wanting to go there to improve his self-prescribed ‘ill’ health, Harold instead finds himself in the middle of a dangerous and stress-inducing revolution. With the help of Jobyna and a friendly giant they meet, Harold gains the stamina to assist in the revolution, realizing that he has been healthy and able the whole time! Jobyna shows right from the start her ability to match Harold comedic timing step for step. This film is definitely my favorite of the lesser-known Lloyd silent features that everyone should check out.

In one of his most endearing and charming pictures, Harold plays a nerdy and awkward kid who fulfills his dream of going to college. Unfortunately, instead of becoming the coolest kid on campus, he ends up being the laughingstock of the whole university after several mishaps and his ever awkward ‘cool kid’ handshake. Can he win over his school crush and go from campus zero to campus hero by playing in the school’s big football game? The film features one of my favorite scenes in all of Lloyd’s filmography when Harold’s tailor must follow him around the night of the school’s Fall Frolic to constantly reappear Harold’s battered suit.

A comedic tale similar to Henry King’s classic drama Tol’able David (1921), The Kid Brother finds Harold as the youngest and scrawniest son of a country sheriff wanting to prove his worth and bravery to his town, his family, and his newfound crush. The film masterfully combines ingenious gags with heartwrenching suspense and thrills as Harold is forced to save his family’s reputation by hunting down the thief who stole the townsfolk’s money. The Kid Brother is the best of Lloyd’s countryside films bolstered by Harold Lloyd and Jobyna Ralston’s onscreen chemistry and the raised life and death stakes in the film’s finale.

Safety Last! is not only Lloyd’s most famous film but contains one of the most recognizable and iconic moments in all of silent film. While working at a department store in the city to save up enough money to get married to his girlfriend, Harold hatches a publicity stunt that will give him a promotion and extra money, hiring a human fly to climb a skyscraper next to the Department Store. After a policeman chases the human fly on the day of the event, Harold must climb the building himself, desperately hanging on for dear life in his pursuit of success and love. While the first two acts of the film are a delight, the finale is a pure adrenaline rush and makes the film one of the best in all of comedy. The suspense builds with each level that Harold climbs and with each obstacle he faces. The stunning realistic technique used in shooting the climbing sequence leaves the audience in terror while our connection with the characters keeps us rooting for Harold to defy all odds and scale the building to get the girl.

What makes Girl Shy stand out as Harold Lloyd’s best and most complete feature film is the strength of its central romance. The film follows the structure of a conventional rom-com, first showing us a budding romance, then a seemingly insurmountable conflict, and then a happy ever after resolution. Harold, a small-town tailor’s apprentice who is deathly afraid of talking to women, meets and falls in love with Mary, a rich young girl from the nearby city. After a falling out between Harold and Mary, Harold must run to stop Mary from getting married to a bigamist before it is too late for their happy ever after. The mad-dash race to stop Mary’s wedding, over fifteen minutes of non-stop, adrenaline-inducing action, contains some of Lloyd’s inventive and over the top gags in his career. Our divested interest in Harold and Mary’s romance makes each delay and obstacle Harold must face in his frenzy that much more intense while we laugh at the absurdity of the situation throughout. Overall, Girl Shy’s strong romance and epic chase scene make it my favorite of Harold Lloyd’s silent feature comedies.

I can promise you that there is not a single dud in all of his silent features. I hope that you can celebrate the great master comedian’s birth by rewatching one of your favorite Lloyd pictures or discovering a new great one.