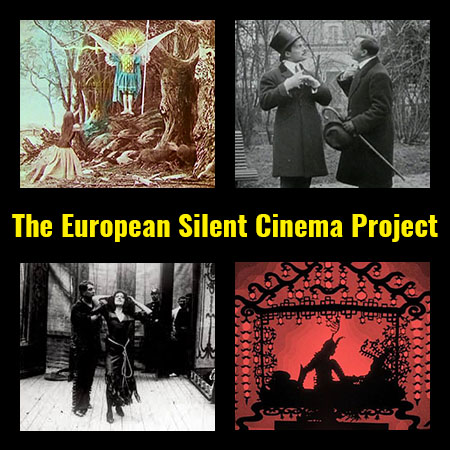 As a silent film fan, I’ve recently realized that I spend most of my time watching silent films made in America in the 1920s. While there is a wide variety of films from different genres and filmmakers in Hollywood 20s films, these films are only the tip of the iceberg. There are numerous unique films and perspectives from other countries that I have only recently started to explore. As I’ve branched out into different countries and decades of silent film, I’ve fallen in love with the amazing, trailblazing films found on the European continent in the silent era.

While many of us film fans tend to only know such canonical works as the German Expressionist films like The Cabinet of Dr. Caligari, Soviet montage films like Battleship Potemkin, or Hitchock’s films from Great Britain, the European Silent Cinema Project is meant to move beyond just these well-known silent Europeans films. This is a chance to delve deeper into the continent’s four decades of silent cinema to discover lesser-known films from silent cinema giants like France, Germany, and Sweden and to explore under-the-radar filmmakers, national silent cinemas and genres.

Starting at the world’s first publically projected moving pictures in 1895 and ending with the transition to talkies in 1930, I will review two European silent films each year. For the first few years, especially in the 1890s, I will discuss each year’s two chosen films in a single entry. When I reach 1910, I will start reviewing one feature and one short in separate posts to better highlight short films which are often sadly not given the attention they deserve. The following list includes all films I have reviewed (with links to that blog post) and those that I plan on reviewing next. Films listed for future review are subject to change based on personal taste, the availability of the films, and possible suggestions from readers.

If you want to learn more about silent European cinema, the 1995 six-part documentary Cinema Europe: The Other Hollywood was a great introduction into the era and provided me with the inspiration to start this project, giving me several ideas for films to review.