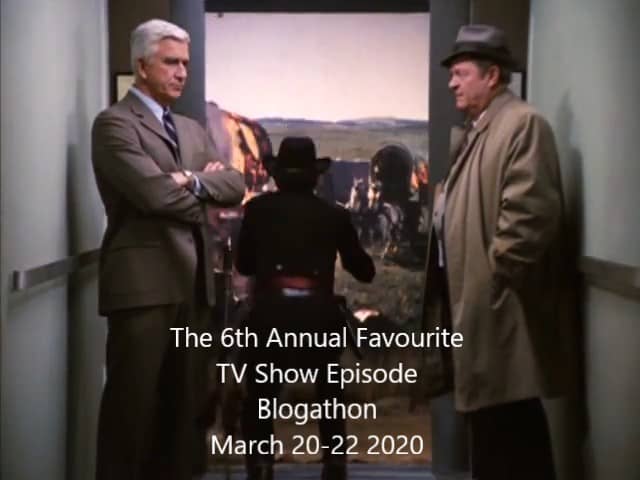 This review of the tv series Police Squad is a part of A Shroud of Thought’s Sixth Annual Favourite TV Episode Blogathon. For more great articles from bloggers about their favorite classic television episodes, visit the blogathon’s official page.

While there is a healthy and thriving academic, critical, and popular interest in classic film, classic television hasn’t always been treated so kindly. Early television series from the 1940s and early 50s have similar survival rates to silent pictures, with numerous episodes and entire series being lost forever. (I’d personally love to see Anna May Wong’s lost The Gallery of Madame Liu-Tsong.) Luckily, more interest has been placed on preserving and appreciating classic television as this six-year-old blogathon shows. I am proud to hop on the bandwagon and help spread the word about lesser-known television series from years passed.

One of my favorite television series is the short-lived 1982 ABC Police Squad, starring comedic legend Leslie S. Neilson. The series also benefitted from the directing and writing comedy team Jim Abrahams, and David and Jerry Zucker, best known for directing Airplane! (1980). This series is great because of its absurdist humor and its influence from 1950s and 60s TV police procedurals. Each episode’s story structure is fairly similar to previous police procedural shows, opening the show with a crime, usually a murder, that the detective team spends the rest of the twenty-something-minute episode trying to solve. In the final act, they usually get their criminal and have a short epilogue scene wrapping up the case and any loose ends.

Police Squad not only copies the structure and storylines of such hit police procedural shows such as M Squad (1957-60) and Felony Squad (1966-69) but aims to copy the air and atmosphere of these shows. The characters in Police Squad are never quite aware of the absurdity of their situations and decisions. The audience isn’t even directly keyed in on a joke with the use of a laugh track either. One could mistake the show as a dramatic series for a few minutes if they aren’t really paying attention. This dry humor really sells the show as the audience is responsible to pay full attention to catch the humor, whether it be a pun or something strange happening in the background.

One of the best episodes to showcase Police Squad‘s hilarity is the series finale, Testimony of Evil (Dead Men Don’t Laugh). The storyline is pretty straight forward. A comedian doing stand-up at a nightclub working as a front for a drug ring is murdered by the boss for taking more money than he should have. Leslie Nielsen’s Detective Drebin goes undercover as the victim’s successor to bring down the drug ring and bring in the criminals responsible for the late comedian’s demise.

The episode continues running gags previously set up during the previous five episodes of the series. After introducing us to Detective Drebin and Captain Hocken in the opening credits, Rex Hamilton is listed as playing Abraham Lincoln as he shoots back at John Wilkes Booth after his top hat is blown off sitting in his box seat at Ford’s Theater. The episode’s special guest star Willaim Conrad’s names flashes across the screen as his dead body rolls out of a driving car onto the street. Naturally, neither appear in the rest of the episode.

Everything seems to be normal as we watch the nightclub comedian’s routine. The jokes seem funny enough for what you might find at a ritzy nightclub. Once the comedian finishes his show and reports to the boss’s office the real humor begins. A man brandishes a knife when the comedian enters the room, not to threaten him of course but just to hang his coat on the wall. The owner of the nightclub Mrs. V poisons the comedian before she sends him on his way. While driving through a dreary canyon at night, the comedian hallucinates, seeing a skull, spaceships, a rollercoaster, and the Three Stooges, before crashing to his death.

Webster Dictionary’s seventh definition for a knife: a coat hanger

This sets the stage for the absurdity of the rest of the episode. The detectives go to the familiar places one would expect them to visit investigating a case: a morgue, the lab, and eventually the scene of the crime. Each place has its eccentric characters and offbeat sights. Toe tags in the morgue don’t carry the deceased’s name but instead, identify which of the victim’s toes went to market and which toes stayed home. The mortician begins speaking into a microphone in a close-up detailing the condition of the dead body only to turn to announce the weather update and then put on new top 40 tunes. The camera pulls back to show us the mortician standing operating an ON AIR turntable.

The lab presents its own unusual circumstances. The lab’s doctor teaches a girl about molecules by shoving her doll into a trash compactor. If she comes back next week, the doctor promises he’ll teach her why cows enjoy being milked. The detectives and lab team then tear apart and demolish a dirty car looking for cocaine when the drugs were in the glove seat the whole time. The story brisks, moving from strange place to place along with dozens of puns, visual gags, and surreal jokes.

Fun Fact: 90% of druggies hide their cocaine in the hood of the car

A large portion of the episode takes place in the nightclub where Detective Drebin goes undercover as comedian Tony de Wonderful. For some reason never explained, he’s a natural-born comedian, making his audience laugh hysterically with his cheesy jokes and bringing them to tears with a tone-deaf but heartfelt rendition of “Somewhere Over the Rainbow”. It seems like every detective on a police show has some random, niche skill that comes in handy when solving a case so Detective Drebin is no different. He gains the trust of Mrs. V, who always menacingly crushes nuts in her hands in lieu of cracking her knuckles, and gets his first job picking up a shipment of drugs.

After receiving a tip from the local shoeshiner about a drug drop at Mrs. V’s, Detective Drebin and Captain Hocken set their team up to make an arrest. Their team of men cover all the exits (literally) to ensure their criminals won’t get away. When they spot a drug runner nicknamed the Frenchman disguises as a woman delivering cocaine to Mrs. V in the middle of the nightclub during de Wonderful’s stand-up routine, Drebin grabs the drugs and gets his criminals.

The episode draws to a close in the office after justice is served. Just like the rest of the episodes in the series, the last shot is a freeze-frame, imitating many such endings in 70s and 80s TV shows and films. Instead of ending on a still image, the actors freeze in place as the world around them continues moving. In this ending, the building begins to collapse. The actors stay as still as they can even as debris from the ceiling falls and hits them on their heads. And with that, the series screeched to a halt, prematurely dying just as the series was reaching its full comedic potential.

The series never caught on during its initial run. Leslie Nelson speculated in an interview that the show didn’t land because it required too much from the audience to pick up on the jokes. Luckily it has gained a cult following through subsequent re-runs and its place on the internet. Also, its short runtime does not hurt it nor does the popularity of Nelson’s subsequent Naked Gun series. Police Squad is a unique experiment in television comedy that has aged superbly and is a great gateway to many great, classic police procedural television shows.

This post is a part of A Shroud of Thought’s Sixth Annual Favourite TV Episode Blogathon. For more great articles from bloggers about their favorite classic television episodes, visit the blogathon’s official page.