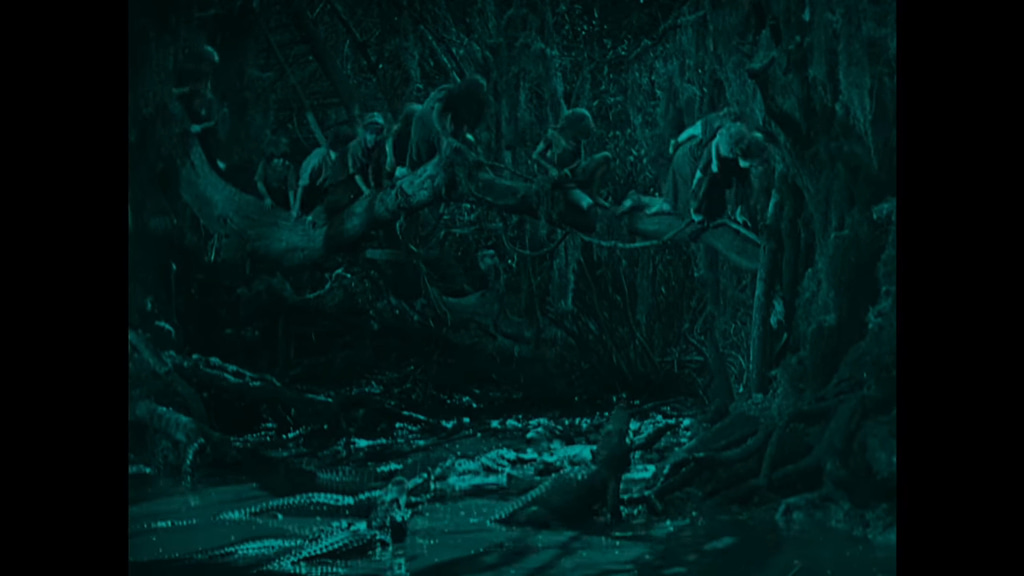 This review of the 1926 film Sparrows is part of Taking Up Room‘s Fake Teenage Festivus Blogthon. Read other great posts about various adults playing teenage roles at the main blogathon page.

Mary Pickford skyrocketed to international stardom in the 1910s playing plucky children in films such as Tess of the Storm Country and Fanchon the Cricket. Her popular juvenile image contrasted heavily with her position as one of the most powerful actors and producers in Hollywood.

Pickford had started acting on screen at age 17, debuting in several of D.W. Griffith’s Biograph films in 1909. At Biograph she slowly worked her way up from playing bit parts, such as a young daughter in 1909’s The Country Doctor, to starring as the main attraction in two-reelers like 1912’s The New York Hat. As feature films became the industry standard in the mid-1910s, Pickford continued playing younger characters along her way to becoming the biggest international star only rivaled by Chaplin.

While Pickford maintained her international star power throughout the silent era, she attempted several times to break away from her popular “The Girl with the Golden Curls” character. These more mature roles in such films as Ernest Lubitsch’s Rosita (1924) never received the same enthusiastic reception from audiences that her juvenile roles solicited. Pickford largely stuck with the child roles that audiences clamored for her to return to Pickford’s juvenile roles.

As Pickford’s late teens turned into her early 30s, convincingly playing children and young teenagers became much more difficult. At age 33, the girl with the golden curls played her last child character in 1926’s Sparrows. A dark gothic melodrama, Sparrows provides the OG onscreen fake teenager Mary Pickford the perfect swan song to showcase her generational talent in front of and behind the camera.

Every Sparrow That Falls

Sparrows centers on a group of orphans forced to work harvesting crops in a secluded swamp. Mr. Grimes, the farm’s scrupulous taskmaster that’d give Tom Legree a run for his money, acquires babies and young children from poor women who can’t afford to take care for them. While the mothers believe Mr. Grimes will lovingly look after their children, he instead exploits them for labor, disregards their physical well-being, and frequently threatens to drown them in the swamp (a threat we’re led to believe he has followed through with before).

Mr. Grimes or Nosferatu? You tell me.

Pickford plays Molly, a young teenager who acts as a surrogate mother to the young children and babies at Mr. Grimes’s farm. She ensures the children stay safe and protects them from Mr. Grimes and his family’s nonstop abuse. Molly holds faith that one day God will provide a way for their escape from their dreary existence no matter how dark things get at the swamp.

Hope comes in the form of a new toddler that Mr. Grimes takes in from a smuggler. Unbeknownst to Grimes, the smuggler—hoping to collect a handsome sum of ransom money— kidnapped the toddler from a millionaire before dumping her off on Grimes. A police investigation helmed by the desperate rich father threatens to expose Mr. Grimes’ repugnant operation and provides and opporutnity to free the children from his tyrannical swamp.

If sinking mudholes wasn’t enough for you how about a pit of crocodiles?

You’d be hard-pressed to find somebody who’d think Pickford is a child; yet, Pickford’s performance fits well within the film’s world. Pickford brings her decade-plus acting experience playing similar characters to the role, exuding an innocent, juvenile optimism with her petite and playful body language. Unlike Pickford, the rest of the children are actual children, making Molly stand out as the clear and natural leader. The audience successfully suspends their audience’s disbelief as we accept her as at least a young teenager. It also doesn’t hurt that Pickford was only five foot one.

Working together with Pickford’s performance is Sparrow‘s behind-the-camera talent. Pickford’s closeups are deliberately executed, lighted and framed just right to avoid showing any signs of aging. Many of the adult characters that share the screen with Mary were also intentionally cast tall. Charlotte Mineau, Gustov von Seyffertitz, and Roy Stewart (plaining Mrs. and Mr. Grimes and the millionaire respectively) all standing over six feet tall.

Of particular note is how the camera frames Pickford when sharing the screen with her adult co-stars. Rarely shown standing next to adults, Pickford often sits down or hunches over to increase the height gap between her and the adult character in the same frame. In the most visually striking scenes, Pickford is placed in the background to both make her shorter and emphasize her vulnerable relationship with the adults in her life.

Molly protects one of her children from towering adults.

Shaving a couple of decades off an actor is a tall task for any performer and film crew; however, the harder feat Sparrows accomplishes is crafting moving melodrama that doesn’t come across as saccharine or preachy. Every technical aspect of the film is carried out by top Hollywood talent. Working on cinematography and lighting alone, the film boasts the generational talents of Hal Mohr, Charles Rosher, and Karl Struss. All three would go on to win Oscars in cinematography and be behind such classics as Sunrise (1927), Dr. Jekyl and Mr. Hyde (1931), and The Great Dictator (1940). It’s a stunning, unique gothic horror showcasing the heights of silent Hollywood’s creative force.

Sparrows has many key moments that could easily induce eye-rolling. Instead, it walks the tightrope of earnestness, charm, and genuine terror as various behind-the-screen talent comes together to weave a cohesive, well-crafted vision. Take for instance, the script written by Winifred Dunn and C. Gardner Sullivan. Molly’s insistent yearning for God to save her and the children could easily have delved into histrionics. The film instead uses Molly’s pleas for faith to insert humor into the film.

When the children ask why God hasn’t helped them escape, Molly assures them that God is busy watching every sparrow fall, alluding to the famous Biblical proclamation found in the gospels. The children take it literally and compare themselves to sparrows. This both serves to introduce hope for the children and add some much-needed humor in their otherwise dreary lives at the baby farm.

The children are constantly trying to one-up those pesky sparrows.

William Beaudine’s direction works beautifully with the script to weave high drama with pure cinematic language. Take for instance the scene of Molly taking care of a sick, dying baby. After fighting throughout the night to vainly keep the dying baby alive, Molly falls asleep. Through a slow fade, we see Molly’s dream of Jesus tending sheep in an open field appear in the left half of the frame as we watch Molly asleep with the baby in tow on the right side of the shot.

Without a single title card or spoken dialogue, Jesus walks into the barn, lovingly takes the baby from the sleeping Molly, and walks back into the field as his pasture slowly dissolves away from the frame. We cut to a close-up of Molly waking, looking down in her arms to find the baby no longer there. At first disheartened with tears in her eyes, Molly looks upwards, nodding gratefully to the heavens as a small smile comes across her face realizing her baby is in a better place.

On paper, this might seem a bit overly dramatic and on the nose but conveying this information so efficiently and visually really makes it work. The scene also reinforces Molly’s deep devotion to the children and her faith that sometime God will intervene. At the same time, the scene heightens the tension that their escape is a matter of life and death for the malnourished and abused children.

Pure cinematic storytelling brought to you by the director of Bela Lugosi Meets a Brooklyn Gorilla.

Perhaps the most distinctive aspect of Sparrows is the gothic atmosphere created by the film’s production design and cinematographers. The swamp is menacing, nearly overtaking Mr. Grimes as the film’s principal antagonist. The art director Harry Oliver spent weeks overhauling a three-acre plot and filing pits of burned cork, sawdust, and muddy water to bring the swamp to life. The film’s dark shadows further unsettle the audience and bring a harsh reality to the film that contrasts beautifully with the more hopeful parts of the film.

Like any good children-centric movie, the real danger onscreen endears us to the juvenile protagonists. When the children crawl on a tree branch dangling feet above a pit of alligators during an escape attempt, we genuinely have to question if a child or two might actually fall since the film previously wasn’t afraid to get dark.

In this way, I can’t help but compare Sparrows‘ look and feel to Laughton’s noir classic The Night of the Hunter. Although much more sentimental than The Night of the Hunter, Sparrows similarly allows its children to face real consequences and fall victim to tyrannical adult characters. Both films capture the innocence of children without glossing over or protecting both the audience and its juvenile characters from life-threatening dangers.

No kid is truly safe in Sparrows.

After Sparrows Pickford would only make one more silent film, 1927’s romance My Best Girl, before finishing her career with four sound films. Struggling to recreate her more mature screen image after cutting off her famous golden curls and sticking to strictly adult roles, Pickford gave up acting and focused on producing films as one of the founding members of United Artists.

While she may not have intended it to be at the time, Sparrows today stands as a fitting final child performance for Pickford, encapsulating both her immense talent as actor and producer. Even for those that might be put off by the sentimental nature of many of Pickford’s films, Sparrows‘ haunting, unrelentess doom beautifully counterbalances its optimistism. Not only does Sparrows stand as one of Mary Pickford’s best, it wonderfully showcases the cinematic artistry achieved in the final years of the silent era.