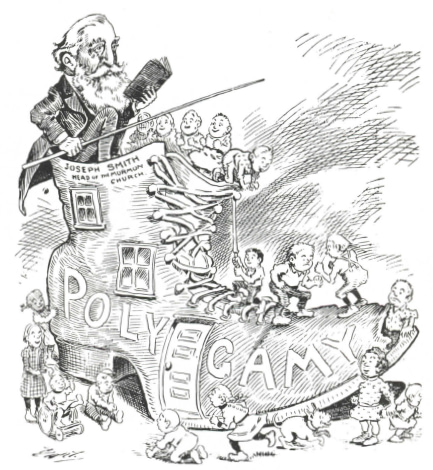 The earliest films relied heavily on other entertainment mediums such as vaudeville, theater, books, and newspapers to create short narratives for audiences. Comedy especially relied on jokes that were prevalent in late 19th and early 20th-century culture. For example, one of the earliest Lumiere films The Sprinkler Sprinkled (1895) was lifted from a popular illustrated cartoon of the day.

The Edison Company’s 1905 film A Trip to Salt Lake City is one of many such films Nickelodeon-era films that pull inspiration from other forms of mass media. What makes this film unique however is it is one of the first, if not the first, surviving films depicting Utahns and Mormons.

The short two-minute film takes place in a Pullman sleeping railcar as a polygamous family is getting ready for bed. First, a train attendant shows six women and their children to their separate beds. Their husband enters carrying three small children and hands them off to their mothers, clearly exhausted from looking after his many children.

The polygamist father carrying three of his many young children.

The man’s six wives then crowd around their husband for him to say goodnight to his kids. Still hyper, his children demand him to play with them. The man gets on all fours and gives a couple of his children a horseback ride before mugging for the camera with his clenched fists raised to the sky in frustration. His wives, now dressed in their pajamas herd their children into their curtained-off beds. Each wife struggles to get his attention as they are all pleading with him to help them with something.

The man reluctantly exits offscreen to fetch something for his family. In his brief absence, one of the older wives runs to her husband’s cabin, grabs his top hat, punches it flat, and hides it in her compartment. The husband returns with a large water container that has six separate tubes to be used as straws. He slides each tube into the six compartments, one for each wife, and the train attendant happily congratulates the polygamist on a job well done. The husband is ecstatic that he finally made all his wives and children happy, maybe hoping for some rest after a long day on the rails with his family.

The polygamist father letting those in the back row know that he is a bit tired of letting his children ride all over him.

The film’s placement of polygamy as the punchline would have been fairly common for Americans in 1905. As early as the 1850s, cartoons poking fun at Mormons’ practice of polygamy appeared in national newspapers and weekly political publications like Harper’s Weekly. Although the Latter-day Saint church had capitulated to the federal government’s demands and began distancing itself from polygamy in 1890, the American public still associated Mormons with polygamy.

Eight years after Utah had successfully become a state in large part because of the church’s shift against polygamy, Mormons came into the national spotlight once again in 1904 during the Reed Smoot hearings. After Smoot won Utah’s 1902 Senate race, Congress started a set of hearings over whether he should be allowed to take his seat in Congress because of his close ties to the church. (Smoot, although not himself a polygamist, was a member of the church’s twelve apostles).

From the first hearings in 1904 to Congress’ vote that allowed Smoot to take his place as a senator in 1907, Mormons appeared frequently in national news stories and cartoons in mostly comical situations. After he testified to Congress in 1904, church president Joseph F. Smith, husband to five wives and biological father of forty-five children, became a fixture in humorous depictions of Mormons as a father overwhelmed by his large cadre of young children and a long procession of wives. Other comics depicted generic Utah polygamist families going about everyday activities such as driving the family in an extraordinary way.

Bottom: Joseph F. Smith struggling to take care of his children while traveling to testify at the Reed Smoot trials with a parade of his wives behind him. (Life, 31 March 1904) Bottom Left: Joseph F. Smith as Mormon Father Goose (Chicago Journal, 9 March 1904). Bottom Right: The Automormon, with “The Smoot” license plate, expressly designed for family use in Utah (Puck Magazine, 14 March 1906).

A Trip to Salt Lake City took many of the jokes told in these comics popular at the time and brought them to the screen. Given the absence of any explanatory title cards, audience members had to be familiar with similar Mormon polygamy jokes to understand the film’s humor. For example, in a short throwaway joke, one of the heavier wives steals her husband’s top hat, smashes the top in, and carries it away to her compartment. Those knowledgable of the popular trope of an older or plainer jealous, polygamist wife would understand that this act of spite against her husband would have come from his attention to his other family and wives over her.

The film’s Mormon characters also fit comfortably with the stereotypes of the day: a bearded older husband dressed in Victorian garb, a pretty, young wife mixed among older and heavier wives, and a boatload of demanding young children. Similar jokes to those in the film can be found in contemporary cartoons. For example, the husband’s solution to give all his family members water at the same time mirrors a Puck cartoon of a man attempting to hold each of his seven wives’ hands simultaneously. Although most Mormon polygamists rarely lived with multiple wives in one location, comic depictions of the husband juggling multiple women at once were the dominant picture of Mormons in late 19th and early 20th-century popular media.

Left: Our fearless polygamist hero devises a system to give all his wives and children water aboard the Pullman. Right: An apparatus for a man to hold hands with all his wives. (Puck Magazine, August 22, 1906). Both the film and comic use a similar creation for an overwhelmed man to meet the needs of his wives whether it be water or companionship.

While many of the tropes used in the film might have been over a half-century old by 1905, A Trip to Salt Lake City does a good job of breathing new life into the punchline in cinematic form. Its claustrophobic framing emphasizes how suffocating the man feels while taking care of his family (a spiritual ancestor of the Marx Brothers’ famous train room scene in A Night at the Opera four decades later). As the wives and children disappear behind the curtains, it lets each comedic bit stand out, never overcrowding the frame except to emphasize the chaotic nature of the polygamist family getting ready for bed.

A Trip to Salt Lake City‘s repeated joke may not be novel for its content matter but it is a perfect example of Nickelodeon-era comedy heavily influenced by printed entertainment. Its short runtime doesn’t allow the joke to overstay its welcome. While over the next decade, representations of Mormons onscreen became more mean-spirited and fantastical, A Trip to Salt Lake City brought decades-old polygamist comic tropes that still appear in modern films and popular culture for the first time to the screen.

This review is a part of my 125 Years of Utah and the Movies series exploring the history of Utah onscreen. Check out historical overviews, reviews of other Utah and Mormon-related films, and book reviews