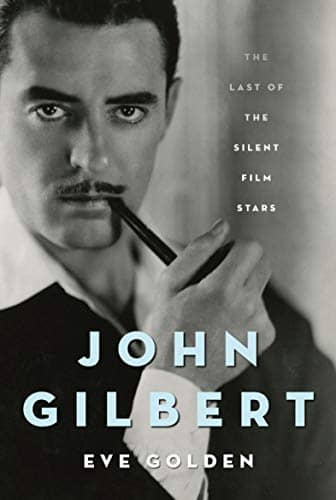 This book review is part of the 2022 Summer Reading Classic Film Book Challenge hosted by Raquel Stecher’s Out of the Past blog. Check out the lineup of the classic film books I am reviewing this summer and the great reviews from others.

I have a strange fascination with silent stars who never translated their careers successfully into the sound era. Last year I dove into David Stenn’s Clara Bow biography. This year I’ve already read and reviewed Tracy Gossel’s Douglas Fairbanks biography. Eve Golden’s John Gilbert: The Last of the Silent Film Stars is another worthy addition detailing the career success and tumultuous personal life of one of the 1920s most popular matinee idols. (He also is one of the many Hollywood stars born in Utah).

Most film fans know John Gilbert as the silent star with a squeaky voice who Louis B. Mayer blackballed. Despite this dramatic narrative that could fit right in any classic era Hollywood biopic, it obviously obfuscates the facts and the realities of the early talkie film landscape. Also it, unfortunately, focuses on Gilbert’s struggles in his later career over the massive talent and charisma he beautifully commanded throughout the 1920s that made audiences fall in love with him.

Golden in her biography does a good job contradicting these myths while also highlighting Gilbert’s unique talents and exceptional onscreen performances. The son of a well-traveled vaudeville actress, John caught the acting bug early on in the 1910s joining an Oregon-based theater stock company. After the company folded, he jumped to motion pictures in 1915 working as an extra at the Inceville studio, appearing in the background of such classics as William S. Hart’s 1916 Hell’s Hinges. More familiar with Gilbert’s later career, I was surprised to find that he began appearing as the lead in films as early as 1917.

Unfortunately, many of Gilbert’s early starring roles are lost. Through Golden’s collection of contemporary reviews, however, we get a good glimpse of what he accomplished and how audiences warmly reacted to his performances in a variety of roles. His time at Fox in the early 1920s was difficult since the studio struggled to keep and develop strong directors and creatives. Gilbert did get to work with a young John Ford at Fox in 1923’s Cameo Kirby , one of his earlier career triumphs.

Foreshadowing, Golden gives us glimpses of Gilbert’s stubborn personality and destructive nature during his younger years before his five short marriages and later decline. Many of these attributes proved to be double-edged swords that aided him during his height but further burdened him in his later years. For instance, Jack’s sensitivity to critique during his height pushed him to fine-tune his characters and upped his acting talents. In his later years, his sensitivity made it rather difficult to overcome a string of commercial flops and win over skeptical and sometimes antagonistic studio heads.

Before his perfectionism, temperamental marriages, and alcoholism caught up with him in the 1930s, we revel in his creative successes in films like The Merry Widow and Flesh and the Devil. Today we might remember his years simply as the Great Lover co-starring in torrid love stories opposite Garbo but Golden highlights his various talents in comedy, his ability to excel in various genres, and his experiences working with other personalities like Lon Chaney and King Vidor.

Always the consummate artist, he was always blunt when he felt like a picture didn’t quite live up to his talent, an attribute MGM was not fond of. Even when a film performed well at the box office, Gilbert wasn’t afraid to give his honest opinion. Given his awareness and frankness, it should be no shock that Gilbert was quite aware that his first sound pictures were not high quality (whose first talkies were though?). He watched as MGM bumbled his star image by handing him projects not suited to his talents and failed to provide him with the financial or artistic resources needed for success.

Ultimately, it was studio politics, and not a fight in a bathroom with MGM studio head Louis B. Mayer or a high-pitched voice, that made it increasingly difficult for Gilbert to get his career back on track. It makes the tragedy of his declining career and early death in 1936 from a heart attack that more tragic; however, he still managed to leave some good work in his talkies, particularly in a comeback role opposite Garbo in Queen Christina and as a seedy seducer in 1932’s Downstairs, a story he co-wrote.

And that is the great thing about reading a biography of a favorite: you’re always pointed towards lesser-known aspects of the person’s career and become interested in films of theirs that you might not have heard of before. I loved learning that Gilbert was fond of writing and directing, aspiring more so to work behind the camera instead of starring in pictures when he entered the film industry. I also discovered his last silent feature Desert Nights, a wonderful brisk 60-minute adventure film that allows Gilbert to run around the desert like a madman. (Ernest Torrance, not Greta Garbo or Renee Adoree, might have been John Gilbert’s best onscreen partner.)

Overall, Golden’s biography of Gilbert is pretty much everything you want out of a biography: fun anecdotes from their early days as they struggled to make it big, a behind-the-screen look into the star’s personal life and personality, and a bigger appreciation for the person and their career. If the only thing you know about John Gilbert is his early death and disappointing transition to talkies, I highly recommend reading Eve Golden’s John Gilbert to get to know the wonderful actor and fascinating character that John Gilbert was.