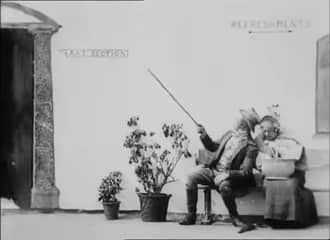 Beginning in May 2020, I sought to deepen my knowledge of the silent era by starting the European Silent Cinema Project. For the project, I review two European silent films each year starting in 1895 and ending in 1930. Visit the project’s main page for a comprehensive list of films and reviews.

Early film relied heavily on other art forms to establish its own methods of storytelling. 1890s films adapted subjects and events depicted in and captured in paintings and photographs, adopted the framing of theatrical productions, and recorded popular vaudeville performers and routines. Film was still trying to find its unique way of telling stories and conveying information as filmmakers around the world experimented with the new medium.

Some of the most fascinating and innovative experimentation with cinematic storytelling occurred in Great Britain in the late 1890s. By 1898, Robert W. Paul had built a robust film production company while new filmmakers, such as James Williamson and George Albert Smith, began to demonstrate their innovative ambition in the nascent industry. While these trailblazing British filmmakers, named the Brighton School after the town of Brighton where many of them worked, continued to make actuality films of popular events, their most substantive and influential work was the short narrative films they produced that incorporated new ways of cinematic storytelling.

One such innovation from the late 1890s was the cut. Due to the technological restraints of early celluloid, most cameras could only shoot enough film for a roughly one-minute motion picture. Most filmmakers in the 1890s were content to use the full one minute of their films on a single continuous shot. Robert W. Paul, on the other hand, was one of the first filmmakers to combine more than one shot into a single film in his 1898 Come Along, Do!.

The film’s first shot shows an elderly couple sitting on a bench outside an art gallery enjoying a snack. Two women pass the couple and enter a doorway, prompting the seated couple to also enter the art gallery. While the second shot of the film only survives as two still frames, there is enough information to understand the rest of the narrative. In the art gallery, the man is a bit too interested in a sculpture of a naked woman for his wife’s liking. She tries to pull him away from the nude sculpture, thus ending the film with the butt of the joke (pun intended).

The film uses several visual clues to establish a consistent geography to connect the first shot to the second and to prepare the viewer for the upcoming cut. The two signs on the wall behind the couple, one pointing to the art gallery on the left and another to a refreshment area on the right, situate the couple in between two spaces. The doorway to the art gallery is present in the shot and becomes the focus of our and the film’s couple’s attention when the two women pass through it. The foreshadowing is driven further home as the man uses his cane to point to the art gallery sign. When the couple finally enters the doorway, the audience is fully prepared for the film’s cut away from the outside bench to the inside of the gallery.

A bit of foreshadowing before the couple enters the art gallery.

The story does not necessarily lend itself to being a two-shot film. It could have easily been shot in one take from inside the art gallery. The cut holds little narrative significance besides moving the couple into the art gallery to meet the naked statue and the film’s punchline. Perhaps extending the film into two different locations allows Paul to better emphasize the couple’s connection before we are shown the man ogling over a naked statue.

The title of Come Along, Do! suggests that Paul was consciously experimenting with movement in his film or at the very least wanted to warn his audience that movement between spaces was key to understanding his film. While Paul’s straightforward direction may seem inconsequential, the early beginnings of film editing would allow filmmakers in the next several years to use cuts to not just move locations but also to elapse time, show a character’s unique point of view, and cross-cut between two different concurrent actions.

The cut was not the only way that early filmmakers could show two different locations in a single film. Paul’s contemporary George Albert Smith in the same year experimented with using double exposure to show two connected events happening in two different locations concurrently. Having years of experience as a magic lanternist, Smith applied his knowledge of the magic lantern slides to film in 1898’s Santa Claus.

In Santa Claus, Smith uses editing and a blackened area of the screen to combine images of Santa Claus on the roof and children in bed onto the screen concurrently. The film opens in the children’s bedroom as they get ready for bed on Christmas Eve. Once their mother turns off the light, Smith through the use of a well-timed cut blackens the right side of the frame leaving only the children’s bed on the left side of the frame and the floor visible onscreen. After a few seconds, an iris shot of Santa Claus on the roof is superimposed over the right side of the screen with a black background. In this second shot shown next to the children still sleeping in bed, Santa Claus walks onto the roof with presents for the children and climbs down the chimney.

While Smith adequately conveys two scenes occurring simultaneously, the final version of the film still has its rough edges. For instance, there is an awkward overlap between Santa appearing in the children’s bedroom and the shot of the roof. The superimposed iris shot for several frames covers up Santa as he walks into the bedroom.

Another jarring aspect of the film is Santa’s sudden disappearance. Perhaps we can chalk Santa’s disapparition into thin air in a quit cut to his magical powers but it still seems awkward compared to Santa’s exciting entrance. Despite these clunky moments, Smith’s experimental cinematic storytelling imaginatively portrays a classic image of Santa Claus on Christmas Eve in a fresh and exciting fashion.

Smith’s magic lantern-inspired technique shows how much early filmmakers were indebted to other 19th-century entertainments and how they created new techniques to expand the scope of their early narrative films. In the coming years, various filmmakers would replicate and play the different types of cuts and superimposition that Paul, Smith, and other Brighton School filmmakers used to efficiently tell stories spread over multiple locations and times to their audiences.