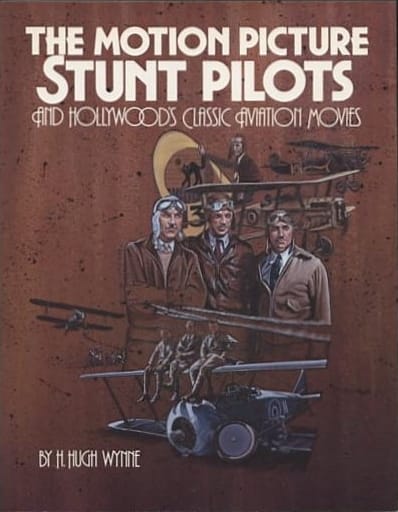 Whether it’s this year’s summer blockbuster Top Gun: Maverick or the silent World War I aerial epic Wings, film always has always been a perfect medium to showcase the wonder of aviation. Over the past century, airplanes and pilots have brought movie audiences big explosions, death-defying stunts, and unparalleled high-speed action.

H. Hugh Wynne’s The Motion Picture Stunt Pilots: And Hollywood’s Classic Aviation Movies looks at the first fifty years of aviation in film, stretching from the 1910s to the end of the 1950s, through the eyes of the pilots who flew for the movies. Written in the 1980s when several of the early motion picture stunt pilots were still alive, Wynne relies heavily on oral history accounts and stories to recapture how it was to work on aerial stunts during the classic era. Even if it’s not always clear how reliable these firsthand accounts given by stuntmen decades later are, these anecdotes are easily the most entertaining part of the book.

For instance, one pilot recounts a prank pulled on Howard Hughes during the filming of Hell’s Angels. A couple of pilots paid a group of farmers to pee in Hughes’ brand new Packard Roaster. When Hughes drove his car off the set without a hitch, everyone was disappointed in their prank’s anticlimactic ending. Another good story includes a former WWI fighter pilot who flew for Western Airlines in the late 1930s. After giving the controls over to his to co-pilot to catch a quick nap, their commercial plane flew close by a group of stunt pilots reenacting a WWI dogfight for the 1938 film Men with Wings. Awaking from his daze to French and German-painted WWI planes whizzing by him, the pilot apparently took back the controls and began diving towards the nearest German fighter plane before his co-pilot brought him back to reality. It doesn’t sound too plausible but nevertheless is one of the several entertaining stories littered through the book.

Besides these colorful stories detailing the making of dozens of films, the book is filled to the brim with film stills, movie posters, and behind-the-scene photographs on set and up in the air. Especially for the chapter on the stunt pilots of the 1920s, there are several breathtaking pictures capturing stuntmen hanging on the edge of a plane hundreds of feet above the ground without a parachute or in the middle of transferring from an airborne plane onto a moving train or car.

Just a sample of the many fascinating pictures contained in the book. Here Al Wilson and Frank Tomick are performing stunts involving planes, trains, and automobiles.

The author’s expertise in and familiarity with aviation and the evolution of early aircraft are unquestioned. Wynne exhaustively lists the specific models of planes each pilot used for aerial scenes in dozens of films. His knowledge of film however can be at times quite lacking. My first red flag of this was in the introduction when he stated that the movies of the 20s and 30s “exemplify[ied] the higher and more civilized qualities of mankind such as honor, valor, marital integrity, respect for law and other virtues that can be found in healthy and peaceful societies”. He might have written this in 1984 but he should have at least known about pre-Code films for heaven’s sake!

While aviation enthusiasts might enjoy his breakdown of what specific planes and equipment they used in shooting aerial footage, I found it difficult to pay attention and follow along. He rarely analyzes the films or discusses how the depictions of pilots and their aircraft evolved over the years. While his barebones plot synopses can be helpful, especially for several lost films, these plot summaries are often his only commentary on the film itself.

Despite the book being more geared towards aerophiles than cinephiles, there is still plenty of excellent film history contained in the book. I found the wingwalkers, who performed stunts on primitive biplanes in the 1910s and 1920s, to be riveting. There is a treasure trove of rarely discussed 1920s films that contain spellbinding, daredevil aerial stunts that really can’t be replicated, with good reason, today. (I originally found this book while studying up on Harry Houdini’s 1919 The Grim Game which features a climactic aerial collision.) Fair warning though. There are numerous deaths throughout so don’t expect many of the people discussed to live long healthy lives into their 70s. Now I finally know why Cary Grant’s character buries all his emotions whenever he loses a pilot in Only Angels Have Wings!

I’d say this is worth a read just for its exhaustive history of early flying and a great list at the end of the book of every Hollywood feature stunt pilots worked on from the late 1910s to the early 1940s. This subject is fascinating and I hope that some author or researcher (one who preferably has at least heard of the Pre-Code era) would undertake a more comprehensive history of aviation on film including more in-depth analysis on the movies themselves. Until then, this wouldn’t be a bad book to introduce you to some new films and become acquainted with the brave, and often downright reckless, motion picture stunt pilots who helped make the marriage between film and aviation a perfect match.