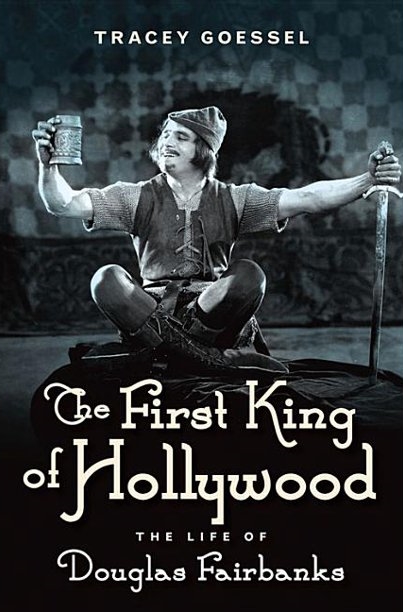 One of the first silent films I ever watched was Douglas Fairbanks’ 1924 epic The Thief of Baghdad. A lavish costume drama inspired by Arabian night tales, the film’s imaginative tale and its star’s unique and energetic charm absolutely stunned an impressable young me. As I became fully enraptured with the films from the silent era, Fairbanks always stood out as a unique talent that could excite and enthrall you with a perfectly placed stunt or a simple flashing grin.

Tracy Goessel’s meticulously researched biography The First King of Hollywood gets to the heart of how Fairbanks built his effusive screen image and in turn played a pivotal role in establishing Hollywood as the pristine moviemaking capital of the world. Like many personalities from the period, the challenge of any historian is to find the truth while shifting through the too-good-to-be-true tales and publicity fibs of the era. Fairbanks’ death at age 56 in 1939 makes this Herculian task even harder as his own insight is less accessible than recollections from his contemporaries who outlived him by decades, all who have their own angle or penchant for exaggerating to create a great story. (Looking at you Allan Dwan!)

Goessel does a good job of comparing multiple accounts and including her own research to arrive at the most realistic sequence of events. Whether covering his family and early childhood or which stunts he did and did not perform onscreen, we are always treated to an entertaining, fanciful yarn followed by a thorough investigation and a more historically accurate sequence of events.

Even the true stories littered throughout the book are fascinating anecdotes that capture Doug’s effervescent attitude and his trailblazing star power. Did you know when shooting The Black Pirate in 2 strip technicolor, they had two sets of each costume, one for indoor scenes and one for outdoor scenes, because the color appeared different on film because of different lighting conditions? Also, there is plenty of 100-plus-year-old gossip. Apparently, Frances Marion, legendary screenwriter and best friend of Mary Pickford, wasn’t a big fan of Doug. Goessel’s access to personal letters between Doug Fairbanks and Mary Pickford add a new dimension to their whirlwind romance and subsequent tragic falling out and divorce rarely seen prior.

I particularly enjoyed how much time the book takes its time to delve into the filmmaking process for each of Fairbanks’ pictures. Goessel is clearly a devoted fan and the perfect person to write this, both enthusiastic for all parts of Doug’s career yet critical enough to know when a picture just doesn’t quite work. Having watched several of his earlier 1910s films (from the wonderful A Modern Musketeer boxset) while reading, I appreciated Goessel’s in-depth analysis that helped me better appreciate the craft behind his motion pictures. I also enjoyed reading reviews and tidbits about several of his lost films almost exclusively in the 1910s.

As Goessel writes in the introduction, Fairbanks’ work has often been dismissed as too popular to seriously study alongside serious works of drama like Battleship Potemkin and the surrealist comedy of Buster Keaton. This in-depth biography is the best case anyone could make for more of us classic film fans to engage with Fairbanks’s monumental work and contributions to the motion picture art and industry. The First King of Hollywood does what any great biography of a film star can do, give us a behind-the-scenes look at the man behind the star and showcase his once-in-a-generation talent.